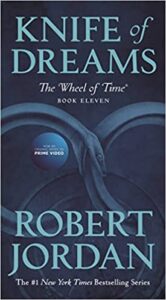 The dead are walking, men die impossible deaths, and it seems as though reality itself has become unstable: All are signs of the imminence of Tarmon Gai’don, the Last Battle, when Rand al’Thor, the Dragon Reborn, must confront the Dark One as humanity’s only hope.

Unbeknownst to Rand, Perrin has made his own truce with the Seanchan. It is a deal made with the Dark One, in his eyes, but he will do whatever is needed to rescue his wife, Faile, and destroy the Shaido who captured her. Among the Shaido, Faile works to free herself while hiding a secret that might give her her freedom or cause her destruction. And at a town called Malden, the Two Rivers longbow will be matched against Shaido spears.