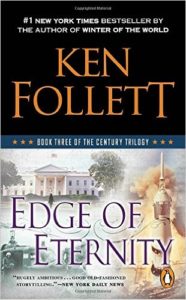 It’s a historical family saga, one of a kind and by welsh author Ken Follett It is the last in the Century Trilogy which was published in 2014. The novel stares the story of characters from four different countries, The Soviet Union, Germany, Britain and the USA and it follows them from the construction of the Berlin Wall to its demise; from 1961 to 1989. One of the most interesting things is that it follows the characters from the previous two novels.

In the previous two, Fall of Giants and Winter of the World the fortune of five international families were followed. The five different families included American, German, Russian, English and Welsh, following their lives through the twentieth century. Let us explore it with a bit more perspective.

Rebecca had been East German teacher and she eventually finds out that she had been spied by the Stasi for years while she ends up committing an act that leads her family into chaos for the rest of their lives. Another story follows George Jakes chronicle who’s a child of a mixed race couple and going through the grind of corporate law career he joins the Robert F. Kennedys Justice Department. He finds himself right in the middle of a civil right battle and it becomes his own personal one. The novel is brilliantly written and reviewing it is hard, since such a rich literature with so much valuable information seldom comes by; a perfect blend of fact and history together to blow your mind.